I Still Can´t Believe I Am Living Here

A conversation with Dr. Vira Tovazhnianska, a pathologist from Kharkiv who has been working at the Second Faculty of Medicine since April as a lecturer (read more).

Dr. Vira Tovazhnianska was born in the city of Stakhanov, Luhansk region, Ukraine. Her family is of Jewish, Ukrainian, Russian, Greek and Czech descent. She lived in Kharkiv, graduated from Kharkiv National Medical University (2013) and gained a PhD  degree in perinatal pathology (2019). She worked in Kharkiv Regional Hospital of Urology and Nephrology, where she gained a specialization as a urological pathologist. In 2015, she joined, as a teacher, Kharkiv Medical Academy of Postgraduate Education Department of Pathology and Histology. She focuses, among other subjects, on oncological pathology.

You have an interesting family background, do you come from a doctors´ family? And what about your Czech ancestor?

Yes, I do. Two professions have been running in my family for four generations. My great grandmother was a therapist, grandmother was a paediatrician, my father is a urologist and mother is a gynaecologist. My grandfather was born in Czechoslovakia, but later moved to Ukraine.

​What brought you to pathology?

It was a chance. The medical education system is different in Western Europe and in Ukraine. I started studying as a scholarship holder, paid by the government. The rule is that the government can choose professions for these students. I gained one from the list by chance – but then I fell in love with it.

What do you find most rewarding about it?

I really like the diagnostical process – the feeling that I do something useful for people who struggle with diseases and make their treatment and life better.

What misconceptions about your job have you encountered?

People don’t usually distinguish between pathology and forensics. So we don’t just cut dead people, don’t send organs to somebody and don’t get drunk! But if you tell people you work with life, diagnose for real doctors, you are a doctor as well as a scientist etc., they are very surprised and don’t believe you.

You have quite good communication skills, are they necessary for a pathologist?

That’s another superstition... Do you think we don’t even talk to each other? (laugh) Good communication skills are good for every human. Also in Ukraine a pathologist normally talks to relatives of the deceased patient or patient who’s being diagnosed, here in the Czech Republic it’s uncommon. And if you mention teaching, communication is essential there.

When did you decide to leave Kharkiv?

On 24 February I woke up very early and heard first bombs. Because of the Donbass conflict in 2014 a lot of families had “an emergency kit” so that they could leave the house quickly. We had prepared it as well. My family – my husband, two-year old daughter and mother-in-law – left an hour after everything had started.

How did you travel from Ukraine to the Czech Republic?

We drove two days towards western Ukraine. At first we only planned to stay in Lviv for some time. There were terrible traffic jams on our way, no place to sleep and constant sirens in cities. Scared and exhausted, we decided to try to go on abroad. At the Polish border my husband left us and returned to Lviv, as he couldn’t cross the border and he also wanted to be useful for our country. But he wanted us to be in safety. As many people wanted to flee, we had to wait at the border for four days. It would have been a suicide, if local people hadn’t helped us with food, tea, diapers etc. When we crossed the Polish border, our friends picked us up and we stayed at their house for several days. Why did you choose the Czech Republic?

My family has several friends here and we have come here before as tourists many times. Our friends found an apartment for us to stay and offered help with finding a job for me. First in Olomouc and later on in Prague.

What did you have to struggle with after crossing the Czech border as a refugee?

I wouldn’t say I had to struggle with anything more than the queues – for visas, insurance etc. All the people we met were friendly and helpful. We just had to wait – no big deal compared with what we experienced Ukraine.

I started sending my CV basically everywhere, because I really wanted to find a job. I asked all my friends, searched on LinkedIn, posted on Facebook etc. In couple of weeks I got my first invitation for an interview. It was from the Second Faculty of Medicine, Charles University in Motol.

Had you known anything of the Second Faculty of Medicine before?

Of course I knew Charles University as a research authority, but I didn’t know its faculties. It was also a matter of luck – I also graduated from the Second Medical Faculty in Kharkiv. Good sign. (smile)

I met Prof. Zámečník and his deputy Dr Škápa. They showed me the department’s work and pathology and molecular biology lab. All the staff were very kind and welcoming from the very first moment. It was love at first sight. Another good sign was that the Dean spoke to me in Ukrainian. And surprisingly even for me, in two days I got a letter of invitation to work at the faculty as a lecturer.

In what state is your Kharkiv department and its staff at the moment?

The hospital is working for urgent cases and the academy is working partly online. Some colleagues left abroad, some just moved to safer regions, and some stayed. A part of those who stayed there is in fact living in the hospital.

Were the relations between Russians and Ukrainians in eastern Ukraine of any interest before the Russian invasion?

Before 2014 nobody cared about the Russian border or the Russians living in Ukraine. The relations stayed within friends and families. We had a lot of students and also teachers from Russia. After 2014, after all that happened, we started to distinguish ourselves more from the Russians, care about ethnicity and speak Ukrainian. After the revolution in Donetsk, Luhansk and the bombing of Odessa, people didn’t believe to Russia and started to prepare their emergency kits.

Do you hope you will return back, or are you planning only for the presence?

After all that has happened, I don’t plan longer than for a day. I am afraid that if this war doesn’t stop as soon as possible, we all will have no place to return. Nobody can predict what happens in Ukraine afterwards.

It is admirable you made it both to become associate professor and have a family, before you were 31. Was it hard, what did you have to face or cope with?

It wasn’t easy, but you do not say “No” to opportunities. When I was offered a project I always said “Yes”. Also first of all it was a matter of luck. I was in the right place at the right moment and people realised I was there and helpful. Then it’s hard work. Support from the family is necessary.

Was there anything beside that that helped a lot?

Of course, my colleagues, both the real ones and the ones I met online. There’s also a difference in the Ukrainian educational system. After I graduated, I could start my PhD studies by correspondence, so I could be working as a doctor and doing my PhD at the same time. So everything was happening at once, I even defended my PhD during the fifth month of pregnancy. 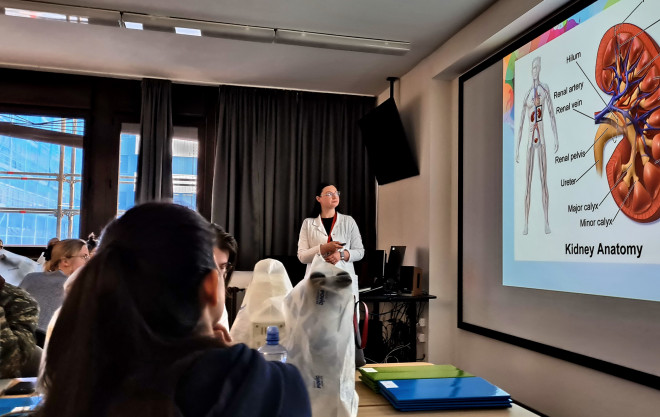 You have already started teaching at the Second faculty, how was it?

Yes, we had a common lecture in English, I and Professor Zámečník. It was lovely, the  students are very smart and involved in the education. It is a great pleasure to teach. I’m very grateful to everyone who helped us on our journey. Besides, that Prague is one of the most beautiful cities in the world. I still can’t believe that I am living here.