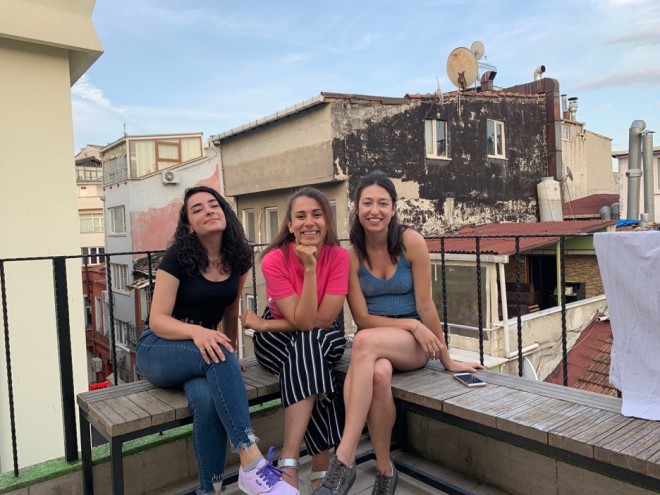 Sarah Alhamami, a fifth-year student of General Medicine, spent her summer internship in Istanbul, Turkey. She sends an essay and pictures.

Title photograph: On the roof of the Hub Café & Hostel, with an IFMSA exchanger from Spain, and the sister of the owner of the café. Sarah Alhamami in the middle.

In my first few days, Istanbul was a huge culture shock. The never-ending traffic jams, the cats that had basically taken over the city, the fact that it took at least an hour to get anywhere. Eight-lane roads packed with cars honking, people yelling, street vendors banging things.

And then, I started to understand the city. You need to wake up at 6 a.m. if you want to be anywhere on time. But that way you get to see the amazing sunrises. You get to be the first in line for the freshest batch of vendor’s pastries of the day. And the 18 million people rushing around in this one city meant it was impossible not to make a few new friends every day. Being squashed next to someone in the tram for an hour really is a sure way to get to know people!

I interned for a month in Cerrahpassa University Hospital. I was placed in the Department of Oncology, where they were conducting clinical trials on new immunotherapy drugs used to target cancer. We spent our days checking up on patients undergoing the trials, or randomizing them into their category. I also attended rounds in the oncology ward, and joined in on some resident talks with internists, oncologists and pathologists.

I gained a whole new insight on both the world of oncology, and how clinical trials are run. I also met some sixth-year students of the university itself who were voluntarily interning. It was very interesting to talk to them and to see the difference between their medical university and ours. Everyone at the hospital was welcoming and helpful, and to see how trials are run was truly fascinating.

I finished from the hospital around 1 p.m. every day, when I would then have the most difficult task of the day: deciding where to have lunch! Afternoons were spent discovering the culture and history of Istanbul, which honestly blew my mind. Once the capital of the Ottoman empire, Istanbul encompasses the rich history of the European, north African and middle eastern countries that had been under the empire.

All in all, it was a truly memorable experience. I became friends with so many wonderful people, gained valuable knowledge, experiences so many new things and tried delicious food. There was never a moment of boredom or lack of things to do. I visited a new mosque, church, castle, museum or beach almost every day. I highly recommend this exciting, fascinating city to anyone planning to go on an IFMSA exchange!