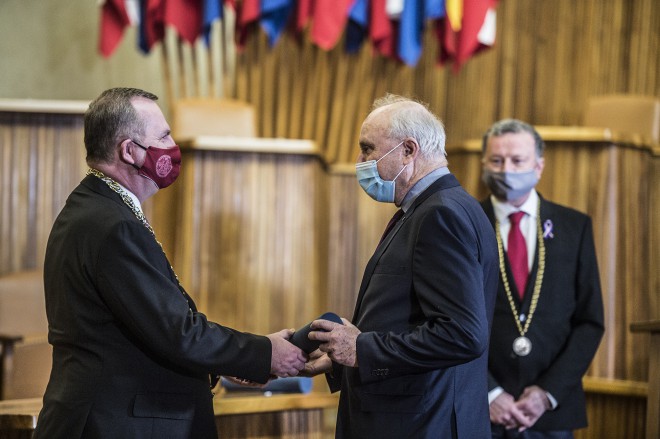 At the ceremony, held on November 17, 2020, the Rector of Charles University Professor Tomas Zima handed over the award Donatio Universitatis Carolinae. One of the recipients was Professor Jan Starý, Head of the Department of Paediatric Haematology and Oncology of the Second Medical Faculty and the Motol University Hospital. The aim of this award is to support important scientists and researchers who make an extraordinary contribution to the professional prestige of Charles University.

Professor MUDr. Jan Starý, DrSc., Head of the Department of Paediatric Haematology and Oncology of the Second Medical Faculty and the Motol University Hospital is one of the internationally recognized paediatric haematologists, who has significantly contributed to the development of the entire field. For thirty years he has been the chairman of the working group for paediatric haematology of the Czech Hematological Association and the coordinator of a number of clinical studies in the treatment of childhood leukemias in the Czech Republic. During his tenure in this role, the chances of curing the most common type of leukemia in children rose from the original twenty to the current ninety percent. Thanks to his knowledge, experience and personal commitment, the Czech Republic is a full member of one of the world's most important groups dealing with the treatment of childhood leukemias. In 2002, he became one of the authors and the principal investigator of an international treatment protocol for the treatment of childhood acute lymphoblastic leukemias, which became the most successful treatment protocol in its history for all centers involved in the study, and thus bringing tremendous benefits to children worldwide.