Tags:
Under discussion in the Senate On Wednesday 2 October, the Senate met for the first time this academic year. Report by Dr Adam Láznička, illustrations by Dr Adam Kalina.

On Wednesday 2 October, the Senate met for the first time this academic year. The meeting was extraordinary – meaning it was convened at the request of the Dean. The main topics on our agenda were voting on new members of the Scientific Council, approving changes in the admission process conditions and approving changes of the rules for doctoral studies.

First, the chairman briefly remembered Prof. Josef Koutecký, who passed away this summer. As a tribute to the Dean Emeritus we held a minute of silence.

Thereafter we congratulated two senators, Dr Veselý and Dr Láznička, who successfully completed their master’s degree, were admitted to their doctoral studies and thus remain in the Senate, as well as doc. Zuna who earned his professorship. At the end of the meeting, Dr Trojanek surprised them with two cakes! He also praised all the organisers of this year's “Dobronice” for their excellent work.

The Dean followed with news from the management. He invited everyone present to the concert which took place on the evening of the meeting and mentioned the “Noc vědců” (Night of Scientists) and the opening of the new building of theoretical institutes, which was built thanks to considerable efforts of Prof. Kolář. Discussing “Žížala” and the next planned construction at Plzeňská also meant realising that we only have the last few months left to enjoy Dr. Voják before it will be closed for good...

The following news dealt with specialist training for doctors. A group, represented by the Dean, Prof. Havlas, young doctors and others, prepared a document on specialist education of doctors, on the form of the examination from the basic foundation training etc. which was sent to the Minister of Health of Czech Republic, Adam Vojtěch.

The news about the prevention of an increase to lunch prices for students in the canteen of FN Motol was met with much appreciation. However, as a part of a compromise, students will have to charge their cards in the morning or evening, not during lunch. More information will be announced soon. 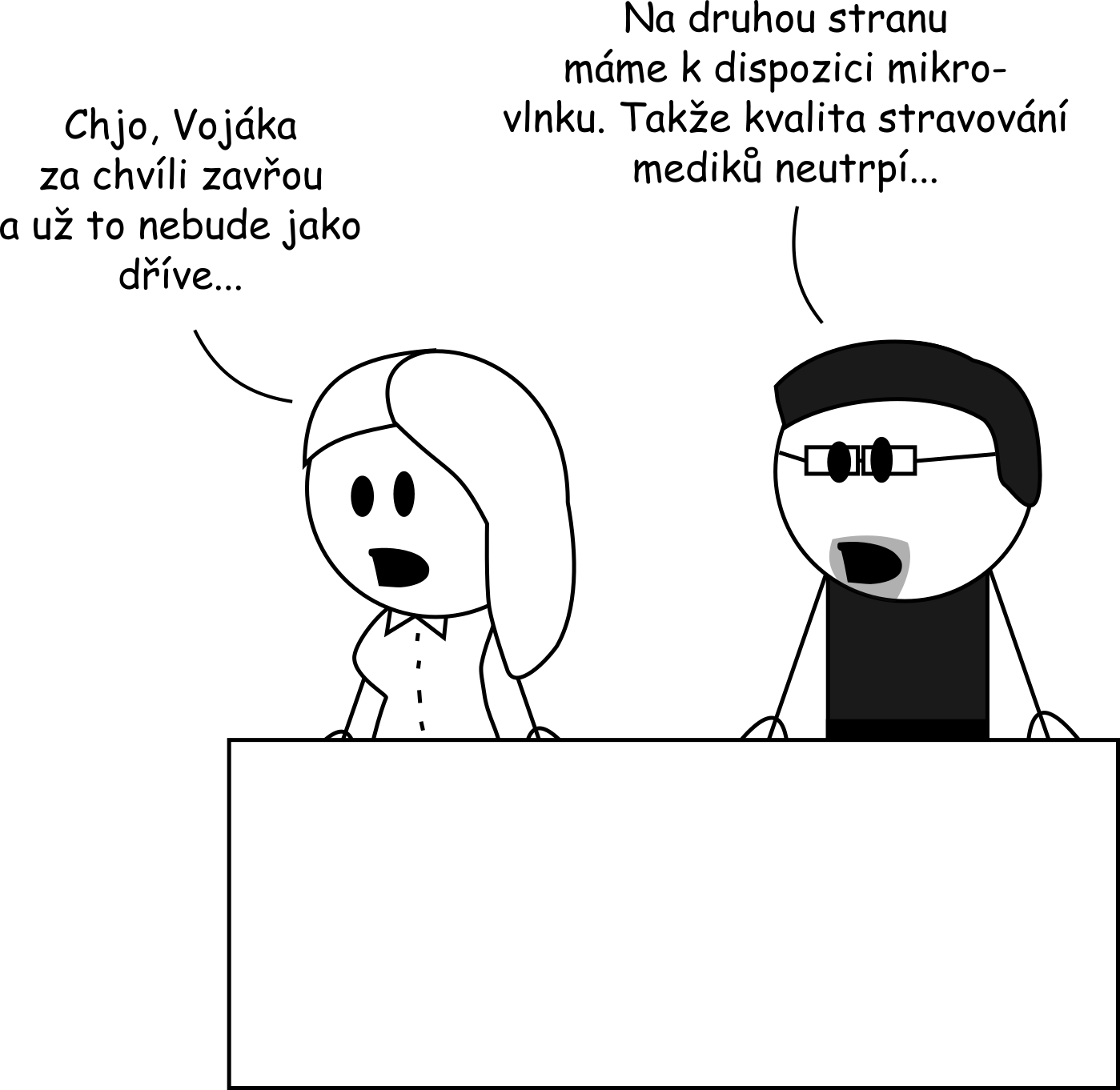 Another major success was announced – students will now have access to a new kitchen with a microwave in front of the lecture halls in Motol. The keys are available at the gatehouse, the Dean’s office and the Ph.D. Department at the lecture halls SP.

Prof. Přemysl Jiruška, head of the Department of Physiology, and doc. Ivo Rudolf from the Institute of Biology of Vertebrates (AS ČR).

This was then followed by the approval of the conditions for the admissions process for 2020/2021, submitted by Prof. Kodet.

The first change was a shift of the admissions to an earlier term (8 till 12 June 2020) with respect to other faculties. Furthermore, the weight of the aptitude test has been increased, and will now include five more questions, i.e. a total of 30pts. The overall possible score from the test increases from 75 to 90 points. The main reason for this is to facilitate a means of comparing the candidates with regards to their ability to reason logically as opposed to with a learned knowledge of biology, chemistry and physics. The proposal was unanimously approved by the Senate.

The last widely discussed item was the Dean's provision regulating the course of study of doctoral programs submitted by doc. Průhová. For example, students will now have to actively participate in the Scientific Conference and affiliate at least one of their papers to the Second Faculty of Medicine. The Senate approved this proposal.

Neither the different committees nor the Academic Senate of the Charles University have met or held a meeting since the last meeting.

The next meeting of the Academic Senate of the Second Faculty of Medicine is scheduled for 20 November – it is public, so all are cordially invited.

We wish you a nice start of the new academic year!