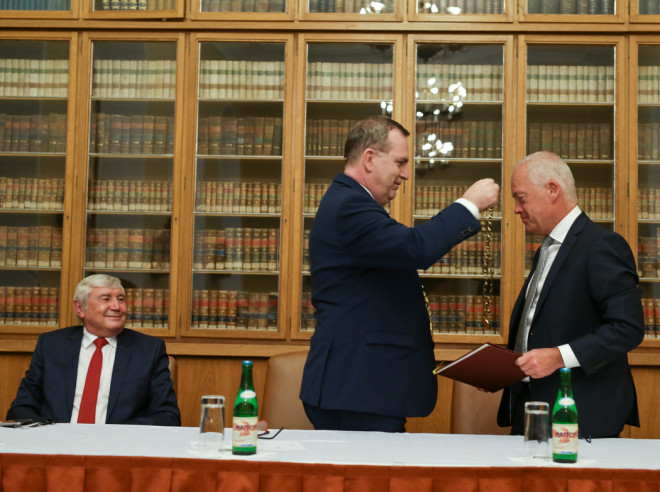 Prof. Marek Babjuk has been appointed Dean of the Second Faculty of Medicine of Charles University. The inauguration ceremony took place on 26 January 2022 in the Patriotic Hall of Carolinum, where he was appointed by the Rector, Prof. Tomáš Zima. The four-year term of office begins on 1 February 2022. Prof. Babjuk, Head of the Department of Urology of the Second Faculty of Medicine, Charles University and Motol University Hospital, succeeds the paediatric neurologist Prof. Vladimír Komárek.

The inauguration, which took place in the Patriotic Hall of Carolinum, was hosted by the President of the Faculty Academic Senate, Dr. Milan Trojánek. At the beginning, he welcomed distinguished guests, including the Rector of Charles University Prof. Tomáš Zima, Prof. Milena Králíčková, who had been appointed Rector of Charles University by the President of the Czech Republic earlier that day, the Director of Motol University Hospital Ing. Miloslav Ludvík and his Deputy MUDr. Martin Holcát, the heads of clinics or members of the Academic Senate.

The Rector thanked the outgoing Dean, Prof. Vladimír Komárek, for his successful leadership of the Faculty and mentioned the development of the buildings at Plzeňská Street and the establishment of the multifunctional building in the premises of Motol Hospital, which took place during his deanship. “I would like to wish Marek Babjuk to have people around him on whom he will be able to lean and with whom he will develop the Second Faculty of Medicine together with the whole academic community in terms of scientific, pedagogical, medical and social role,” said the Rector Prof. Zima. He also thanked for the cooperation and support he was receiving during his eight years in office, as his term of office, like that of Prof. Komárek’s, comes to an end at the end of January. 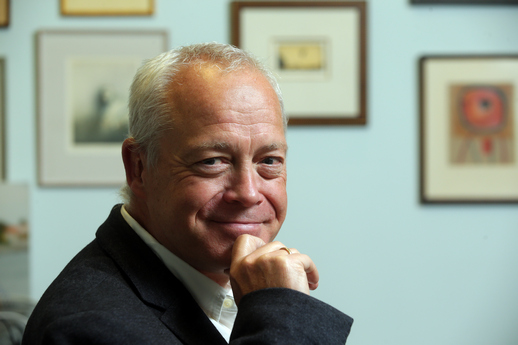 Prof. Vladimír Komárek looked back on the eight years he spent as Dean of the Faculty. In his speech, he especially thanked his colleagues from the University, the Second Faculty of Medicine, other faculties of Charles University as well as other medical faculties. He also thanked the management of Motol University Hospital and the students for their contribution to the creative atmosphere and the management of the Covid-19 disease pandemic. “The students at our faculty were truly covid heroes who joined vaccination centres, collection points, anaesthesiology, resuscitation and intensive care units or covid units, and I thank everyone for that.” He wished good luck to the incoming Rector Prof. Králíčková, the outgoing Rector Prof. Zima as well as the Faculty and his successor Prof. Babjuk.

Afterwards, Dr. Milan Trojánek thanked Prof. Komárek and the entire faculty management for all their work. He looked back at the time of Komárek’s leadership, which he described as beneficial. He talked about the material, financial or personnel development of the Faculty, but he put the greatest emphasis on the friendly atmosphere associated with the Second Faculty of Medicine. “The main thing that remains behind you,” he said to the outgoing Dean, “is the humanity, the effort to bring people together, to bring students and teachers and groups that exist at the Faculty together. If we want the Faculty to work as a whole, it’s all about the people, and you've left a big mark in that, and we're very grateful for that.”

Then Dr. Trojánek briefly introduced Prof. Babjuk as a candidate for the Dean of the Second Faculty of Medicine of Charles University. The Rector hung the dean's chain, which had been worn by Prof. Komárek until then, on the neck of his successor Prof. Babjuk.

Prof. Marek Babjuk delivered an inaugural speech in which he presented his main goals and, among other things, also highlighted the connection with Motol University Hospital. “I dare to say that the Second Faculty of Medicine would not be what it is without the Motol Hospital and the Motol Hospital could not play such an important role in the Czech healthcare without the connection with the Second Faculty of Medicine. I would like to emphasize that the mutual symbiosis between the Faculty and the hospital involves not only our mostly common employees, but also students who bring a breath of fresh air, new ideas and represent the future and perspective of not only the Faculty but also University Hospital in Motol.”

Dr. Trojánek concluded by wishing the new Dean a continuing good relationship with the key partners, Charles University and University Hospital in Motol. The event continued in an informal atmosphere in the foyer of the Patriotic Hall.