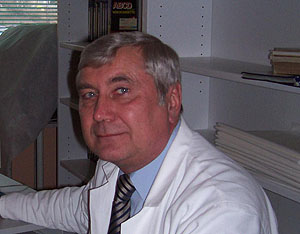 In the following interview we would like to introduce to you prof. Komárek, the chief physician of the Department of Paediatric Neurology. He successfully passed through the professorial procedure at the end of 2008 and he was in May 2009 appointed Professor of Neurology by Czech President Václav Klaus. Other recent successes include: The Prize of the Health Official – 2008, which was received for his team's grant project in December 15, 2008.

A few words about prof. Komárek:
Prof. Komárek was born in Prague, where he studied at the Academic Gymnasium on Stepanska street and then the Faculty of Paediatrics – Charles University. After graduation, he started as a paediatrician in Teplice and later as a paediatric neurologist in Prague 4. He worked for 25 years (since 1984) in the Department of Paediatric Neurology of the 2nd Faculty of Medicine and has presided as chief of the department since 1991. He passed his postgraduate specialization exams in paediatrics and in paediatric neurology. In 1993, he was appointed Associate Professor in Neurology. He participated with others in the creation of the ‘Governmental Program of Care for Disabled and Handicapped Citizens’ and established the foundation ‘Dětský mozek’ (= Childrens' Brain), which provides ‘respite care’ not only for children, but also for adults and seniors with neurological disabilities. Thanks to prof. Komárek, the ‘Centre for epilepsy’ still continues in Motol University Hospital. Created according to a Dutch model, the centre provides complex care for children and adult patients with epilepsy. Within the framework of pedagogical praxis he lectures not only to students of the 2nd Faculty of Medicine, but also in the Department of Drama in DAMU (Theatrical Academy of Fine Arts) and in FHS, of which he is a co-founder. He is married (his wife works in Motol Cardio Centre), has a daughter, who works in a rehabilitation area, and a son, who is engaged in social governance. He is also a proud grandfather having two grandchildren – Filip and Adelka. 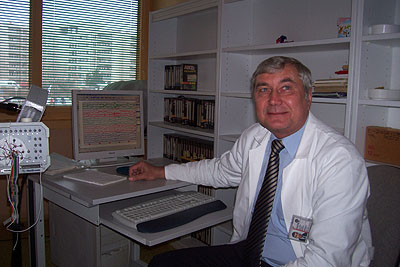 Could you briefly say what you spoke about in your professorial talk?
My professorial talk was dedicated mainly to Epileptology and Electroencephalography (EEG). I presented results of works dedicated to nonlinear (‘chaotic’) EEG analysis, which helped find signs of an oncoming epileptic seizure. The aim of this research is to establish a sufficiently sensitive and reliable chip, which could be implanted into the area of where it is generated, and which could alert the patient to the incoming seizure or even stop the seizure by electrical impulse or by releasing of an inhibitory neurotransmitter. The next part of the talk was directed at revealing the reason for refractory epilepsies. It refers to magnetic-resonance spectroscopy, that we with Ing. Hajek from Prague IKEM (Institute of Clinical and Experimental Medicine in Prague 4 – Krč) introduced into preoperational examination (they were the first to do this in the Czech Republic). This method can specify the amount of N-acetylaspartate (NAA), choline and creatinine in a certain volume of the brain (e.g. in hippocampus) and create a biochemical map of the brain. Dysplasia, which is responsible for the epileptic process, could occur by a decrease of NAA in MR spectroscopy, even if it is not possible to see it in magnetic resonance. Next I presented a study, which apparently seems less scientific than top EEG analyses and spectroscopic imagination, but was very interesting. We asked children treated for epilepsy to complete a questionnaire. About twelve hundred children answered 34 questions regarding quality of their life – not only to how serious is their epilepsy, but also the influence on their school results and out-of-school activities. We repeated the questionnaire after 10 years, in the year 2004. We got almost eight hundred answers of the same old children with epilepsy and it showed that projects directed to the improvement of diagnostic-curative care reflected significantly on improvement of their quality of life. Children from the second group are more attentive, have more leisure time for activities, and are better accepted by society. It pleased me that the professorial talk in the 1st Medical Faculty brewed some stormy discussions including the mathematical aspects of chaos theory as well as psychosocial aspects of epilepsy. 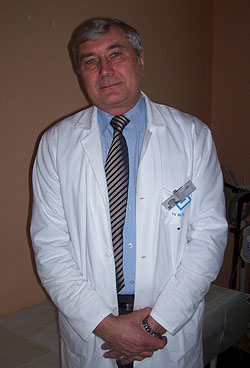 Being appointed professor means fulfilling large amounts of requirements in diverse activities. What can you say about the work?
Being appointed a professor means to fulfil a big amount of duties on a variety of activities. I sometimes say that the head chief's chair has four legs, one of them is medical (patients and treating them), the second is pedagogical (students and teaching them), the third is science, research and publications, and the fourth is – in a medical hospital of course – management of the clinic and economy. I confess that the economy management I enjoy the least, and that even though I like research and to invent new things, as well as teaching (students must forgive me), I like most of all treating/handling patients – hospitalised patients as well as ambulant patients/outpatients.

How do you teach behind the scenes/off-stage? (Note: The professor teaches Developmental Neuropsychobiology at the Theatrical Academy of Fine Arts – DAMU)
In DAMU? It was difficult in the beginning, because I had a feeling that things which I tell them – about the development of the brain, how the limbic system, cingulum and hippocampus look – is a very difficult thing for them. But I found out that they are able to understand it and that I learn myself how to teach it better when I have to teach someone else other than medical students. We still have to hold the bare concrete facts. People can always use more creative and experimental lectures in the theatre faculty.

If you were at the beginning of your career, would you follow the same professional route according to your experiences, or would you rather set out to pursue the depths of another medical branch or even different profession?
Perhaps I like to think that I got to where I am, to a certain extent consciously and accidentally. I liked on the one hand, natural sciences at school, on the other hand, psychology and philosophy – also totally different branches. Finally, it appears that paediatric neurology connects far more than other branches of medicine with the less graspable psychological-socio-philosophical level. Actually I spoke about that in the conclusion of my second inauguration talk at Charles University. When I was asked about perspectives of the branch I stressed that neurology will blend together not only with genetics, but also nanotechnologies or other new medical techniques, certainly with philosophy, sociology and psychology. If someone told me I couldn't do medicine, I would maybe pursue a literature-related field of study.

Thank you very much for the interview and I wish you much joy with your grandchildren, patients, and students!
-az- and -jj-