Drahomír Kolenčík, a fourth-year student, took a part in a two week mission in Malawi, Africa. It was organised by the International Humanity. One chief doctor and four medical students opened consulting offices and treated patients in a newly built hospital in one of the poorest parts of the world. 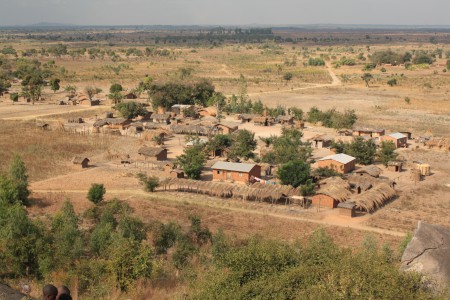 This was a wonderful experience, and one that I would recommend to everybody. If you decide to visit the same country as I did then I'm absolutely positive you won't feel let down. We couldn't have wished for more friendly hosts and I hope that the work we did there helped them at least in some small way.

First things first, though. Our whole group of travellers met for the first time in Vienna airport at the end of July. From there we set off for Addis Ababa in Ethiopia, then on to Lilongwe. Although the airport was quite close to European standards, when we arrived in Lilongwe, where our Malawi experience began, we immediately realised that we were in rather poorer surroundings. To begin with we needed to buy medicines and groceries for two weeks, then we headed off to the one of the poorest areas of the already poor country. We were quite certain of that after a few miles, when we hit the tracks crossing the fields. An hour or so later I knew this was surely the worst ride of my life, but everything was forgotten when we arrived at the village where we would be staying over the next two weeks. The locals welcomed us with typical locals dances and singing. I was surprised at how accurate my stereotypical ideas of Malawi were. The life of the villagers is simple and hard. Average education is low or non-existent, but they make up for it with their attitude. The kids liked us in particular. Whenever they saw a white face they ran up screaming ‘Azungu’ (white man, foreigner).

Over the next few days we prepared the hospital for opening. We had eight rooms, two of them for storage, two for hospital cases and three for examining patients. For the first few days we only had use of one room for patients, but after that we were able to open all of them. One office was for children, and it was also used by the only doctor on our mission. There were a couple of medical students in each of the other offices.

I guess that no one from Europe would describe this building as a hospital – neither in size nor in equipment – but it is definitely a critical change for locals. We have to accept that we are in one of the poorest countries in the world. I've already mentioned the roads and the conditions they're in. It's quite normal to find asphalt roads in only a few places in a district (most of them built by the European Union), so you can well imagine that for most of people travelling is complicated and expensive, and if they need to go to the nearest hospital it's not a simple task at all.

One doctor and four medical students took part in the mission. As I've already mentioned, the doctor's main responsibility was the children. International Humanity made huge progress in paediatric care when they managed to reduce the incidence of malnutrition in the area, thanks to education and basic nutritional guidance. The most common crop is corn and every meal is made from it, so it comes as no surprise that there is lack of protein in the diet.

We managed to treat 100 patients a day and we worked approximately 10 hours every day. For me and other students it was a unique experience, because compared to life in the faculty environment we were finally able to take action and make a difference. Just imagine how it is when you don't have any devices or lab tests to help diagnose problems, just anamnesis and physical examination.

An important part of our mission was the ceremonial opening of hospital. A few hundred people came from all around the local area, and some official representatives came to give their blessings too. An interesting thing about Malawi is that they have two systems of government. One, the national government, is a typical democracy, where everyone votes for their representatives. The other, local system is based on traditional tribal organisation. These are two completely different approaches and I have no idea how it can possible work. Even so, the important thing was that everybody came and celebrated the opening of the hospital together.

If I were to sum up these two weeks, I would have to say how glad I am that I went to Malawi. We helped as many people as we could and in return got invaluable experience in return that I couldn´t get in normal European conditions. Naturally I would recommend the experience to everybody, so if you do want to give a try, just visit http://www.dreamafricacarefoundation.org/. More information about the humanitarian organisation I travelled with is available at http://www.internationalhumanity.cz/.