Presenting a New Perspective on the Aetiology of Short Stature Complexes 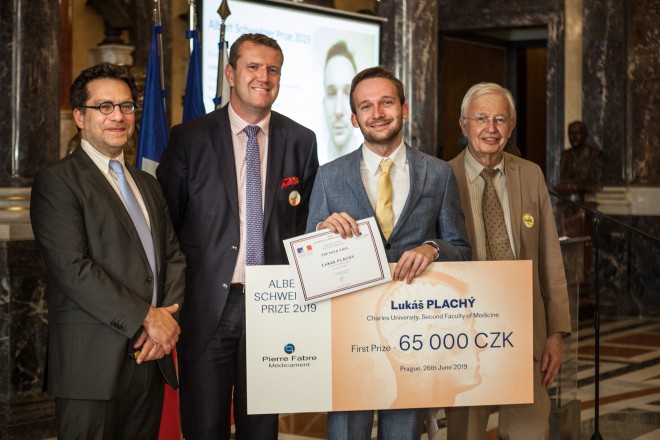 This year’s Albert Schweitzer Prize, awarded by the French Embassy, was awarded to Dr Lukáš Plachý (of the Pediatric Clinic). He has thus continued the line of successful PhD students from the Second Faculty of Medicine who have received the prize in the medical field in recent years. The ceremony took place on 26 June. A conversation.

MUDr. Lukáš Plachý studied General Medicine (graduating in 2016) and is a PhD student at the Pediatric Clinic of the Second Faculty of Medicine of Charles University and the University Hospital Motol under the direction of Docent Štěpánka Průhová.

What is your area of interest and what project did you submit to the competition?

As part of my postgraduate studies I research the genetics of short stature. We have been able to prove that more than half of the cases of the serious forms of short stature complexes are caused by mutations in a single gene (a monogenic disease) and that the most common cause are mutations in genes that are important for proper growth plate function. This research shows a completely new perspective on the aetiology of short stature, which is typically seen as a polygenic disease.

What took place during the competition?

I was nominated as a representative of the Second Faculty of Medicine after this year's Scientific Conference. I presented the results of our study to a commission composed of representatives of the French Embassy and the individual medical faculties. The presentation was followed by an approximately ten-minute discussion, during which I answered questions from the members of the committee. This commission subsequently recognized three participants from the nine representatives of the various Czech medical faculties with an award.

This scholarship includes a international working program. Do you know where you would like to go?

We’ll have to think about it, but I'm looking forward to the opportunity.

What are you planning for the summer?

This summer, like every year, we‘ll go to the DiaTábor with our colleagues, which is a camp for children with type 1 diabetes. My girlfriend and I are also planning to take a vacation in Italy.